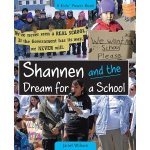 When a toxic waste spill forces the closure of her school, 12 year old Shannen Koostachin and the other children in her community must attend classes in leaky, drafty, crowded portable classrooms.  Living in isolated Attawapiskat First Nation, a small Native community in northern Ontario, Canada, Shannen’s people are used to taking care of themselves.  But when Shannen hears that the Canadian government has backed out of a promise to build a new school, she and her friends launch an awareness campaign that mobilizes Attawapiskat, other Aboriginal communities and people across Canada.  Arguing that their children are entitled to the same education and facilities as other Canadian children, their campaign inspires a new generation of community activists and succeeds in holding the government to its promise. (mmc)