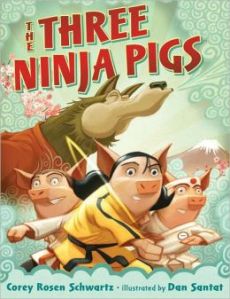 A sister and two brothers are featured in this retelling of The Three Little Pigs. The sister, a dedicated karate student, saves her brothers from the Big Bad Wolf’s huffing and puffing not by fighting but by demonstrating her the strength of her skills