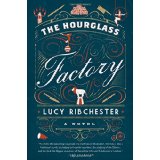 Frankie George is desperate to make her way in journalism, despite the overt sexism of her colleagues.  Freddie Primrose has been shifted to the Suffragette Special Branch of Scotland Yard, much to his personal chagrin.  Their paths cross when Ebony Diamond, an acrobat and former member of the Women’s Social and Political Union, goes missing after two murders.  All signs point to cell of suffragettes set on militant action, but both will find that nothing is as simple as it appears in 1912 London.